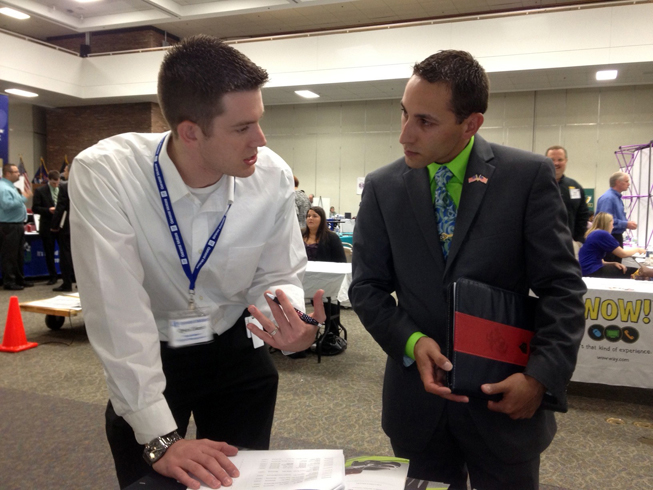 – With higher-than-average unemployment among veterans and an estimated 1 million men and women leaving the military within the next five years, General Motors and the GM Foundation are helping to pay for job fairs across the country aimed at finding meaningful employment for returning veterans.

GM and the GM Foundation are contributing $250,000 to the U.S. Chamber of Commerce and National Chamber Foundation’s Hiring our Heroes program, a national grassroots effort to find jobs for returning veterans and their spouses, many of whom have put their own careers on hold because of long separations and overseas deployments due to military service.

Since Hiring Our Heroes was launched in March of 2011, more than 9,500 veterans and spouses have found jobs, according to the National Chamber Foundation, which said it is on track with partner agencies to host 400 hiring fairs this year. The goal is to engage the business community in committing to hire 500,000 veterans by the end of 2014.

Volt is unique among electric vehicles because you have two sources of energy. You have an electric source–a battery–that allows you to drive gas–free for an EPA–estimated 35 miles. And there’s also an onboard gas generator that produces electricity so you can go up to a total of 375 additional miles on a full tank of gas

GM also said it is recruiting qualified veterans to fill some salaried and hourly job vacancies and is encouraging its network of more than 7,000 suppliers and dealers to hire veterans and spouses for openings. GM will sponsor a booth at the National Veteran Small Business Expo and job fair, June 26-28 at Cobo Hall in .  The UAW Veterans Department will also attend in support of the recruiting effort.

In a June 19 letter addressed to suppliers and dealers, GM Chairman and CEO Dan Akerson asked them to support Hiring our Heroes by considering veterans and spouses when filling job openings.

“The best way to thank the men and women who volunteered to serve our country is with a good job when they return home,” said Kenneth J. Barrett, GM chief diversity officer and a retired Navy captain.

“Between this gift and the combined efforts of our GM family, we hope to help more veterans jump-start their new careers in the civilian world. Veterans bring discipline, a work ethic and skills to employers unique to their military training, so hiring them isn’t just the right thing to do, it’s the smart thing to do,” Barrett said.

The U.S. Bureau of Labor Statistics reported the May unemployment rate among veterans who have served since 2001 was 12.7 percent, compared to the national jobless rate of 8.2 percent.

“As the auto industry continues its own recovery, we hope to help identify as many jobs as possible within the GM family – including suppliers and dealers – for qualified veterans,” said Barrett. “At GM, we have nearly 5,000 veterans in our workforce today and 45,000 more who are retirees.”

GM’s gift will help fund at least 20 veterans’ job fairs in strategic GM markets. At these fairs, GM, a GM supplier and GM dealer will serve as sponsoring hosts.

David M. Warner, who attended a veterans’ career fair in , on Feb. 10, left the Marine Corps on Feb. 23, and started work at GM Fairfax () Assembly on April 1 as a material group leader in the plant that builds the Buick LaCrosse and Chevrolet Malibu.

“I’m very grateful for this opportunity,” said Warner. “Many of my fellow Marines are seeking work, and I hope their search goes as well as mine did.”

The GM Veterans Affinity Group works closely with GM recruiters to identify and mentor job-seeking veterans, including those who are disabled.

“Because military men and women are trained to not brag about personal accomplishments, they sometimes need coaching to sell themselves in the civilian world,” said Ryan Church, an Affinity Group member and assistant program engineering manager for the Chevrolet Equinox. Church also is a 12-year veteran of the U.S. Air Force and Air National Guard.

“Veterans can identify when they see and talk to ’one of their own’ on the other side of the table at these job fairs,” Church said.

GM Talent Acquisition sends weekly updates on salaried job openings to state employment agencies, veterans’ groups and outplacement firms, and uses analytics to refine and improve its outreach to veterans. The GM Careers website includes a Veterans section on the home page with a link to the company’s recruiting calendar. As a corporate participant in the Army Pays program, all service member participants are guaranteed a job interview with GM.

In addition, GM, suppliers and dealers will be able to participate in as many as 400 job fairs across the country. GM will also market its GM Military Discount program – the most generous in the industry – and host Cell Phones for Soldiers drop-off points.

Volt is unique among electric vehicles because you have two sources of energy. You have an electric source–a battery–that allows you to drive gas–free for an EPA–estimated 35 miles.

With nearly 5,000 military veteran employees, General Motors’ support for the armed forces spans generations. Today, Chevrolet assists Cell Phones for Soldiers, Achilles Freedom Team of Wounded Veterans, the Fallen and Wounded Soldiers Fund, a variety of employment and grassroots initiatives, and is the Official Vehicle of the Army-Navy game. The GM Military Discount program offers the industry’s best discounts on most Chevrolet, Buick and GMC vehicles for active-duty, reserve and retired service members and their spouses. GM’s military community can be found on Facebook.

General Motors Co. (NYSE:GM, TSX: GMM) and its partners produce vehicles in 30 countries, and the company has leadership positions in the world’s largest and fastest-growing automotive markets.  GM’s brands include Chevrolet and Cadillac, as well as Baojun, Buick, GMC, Holden, Isuzu, Jiefang, Opel, Vauxhall and Wuling. More information on the company and its subsidiaries, including OnStar, a global leader in vehicle safety, security and information services, can be found at http://www.gm.com.

About the GM Foundation

Since its inception in 1976, the GM Foundation has donated hundreds of millions of dollars to American charities, educational organizations and to disaster relief efforts worldwide. The GM Foundation focuses on supporting Education, Health and Human Services, Environment and Energy and Community Development initiatives, mainly in the communities where GM operates. Funding of the GM Foundation comes solely from GM. The last contribution to the GM Foundation was made in 2001. For more information, visit www.gm.com/gmfoundation.