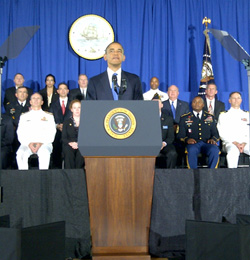 Once a strategic defense site for our nation’s capital during the War of 1812, Washington’s Navy Yard hosted President Obama today as he announced the latest efforts in Washington to defend America’s veterans from the clutches of our 9.1% jobless rate—and particularly Iraq and Afghanistan veterans who are suffering from an unemployment rate above 13 percent.

This morning, my colleague Vivian Bendewald (a student veteran and military spouse herself) and I joined dozens of veterans and their spouses and the President at this historic base where he announced the public and private sectors’ latest initiatives to address veterans’ unemployment issues. We have been working together with the Administration over the past several months in expanding the “Joining Forces” initiative, and the Chamber remains at the forefront of the private sector’s efforts to tackle the issue of veterans’ employment head on.

Today’s opportunity to join the President to highlight progress and the way ahead comes on the heels of our largest veterans hiring fair to date, which took place last month in Los Angeles and included Prince William and Kate.  As the memories of L.A. begin to fade, our campaign to help veterans and military spouses find meaningful employment in the private sector continues in earnest.

In response to our hiring fairs on the USS Intrepid in New York City and in Los Angeles, the Chamber has received hundreds of emails from veterans, military spouses, and employers about what makes Hiring our Heroes different from other employment initiatives.

There are three fundamental reasons:  1) we are focused on making a difference in local communities where veterans and their families are returning every day; 2) we believe that it is critically important to coordinate public and private sector efforts to help veterans and military spouses connect with employers; and 3) we have only one measure of success—jobs for the one million unemployed veterans in America.

The aim of our 100 hiring fair effort is to create a movement, and the presence of the Duke and Duchess of Cambridge at Sony Picture Studios last month will undoubtedly help us achieve that objective.  In fact, in just the few weeks since that high-profile event, a half-dozen local chambers have been inspired to organize their own events.  For example the Arizona Chamber has been working independently with the state directors for DOL VETS and ESGR, and they asked us to join them to host a hiring fair at the end of September.

And we’re just getting started.  We have another 49 confirmed fairs between now and the end of the year.  In the near term, the Chamber will take this effort to rural America, where veterans’ unemployment in many areas is upwards of 20-30 percent.  On August 13, we will join forces with Montana’s Employer Support of the Guard and Reserve (ESGR) for a hiring fair in Great Falls, where 60 employers will gather with job opportunities for veterans, guard and reservists, and military spouses.

NBC continues to be a strong partner for Hiring our Heroes.  In addition to covering all 100 of the hiring fairs through their local affiliates, NBC News is dedicating an entire year’s worth of programming to a new series, “Making a Difference on the Homefront.”  The series, an extension of “Nightly News with Brian Williams’” award-winning franchise, is an effort to shine a light on veterans, military families, and the issues affecting them across the country.

We know that today’s announcement by the President will continue to raise awareness around the country about the need to help many of America’s finest men and women find the career opportunities they deserve and are qualified to fill.  And whether it’s a mega hiring fair in New York City or a smaller one in Great Falls, our commitment to connect talented veterans and military spouses with employers that have job opportunities is equally strong.

For more information about Hiring our Heroes Great Falls and other upcoming hiring fairs, please go to:  http://www.uschamber.com/veterans/events or visit our Facebook page at www.facebook.com/HiringourHeroes.