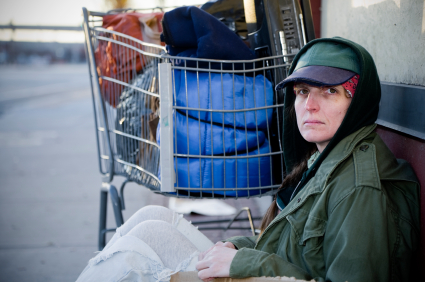 Homelessness is a serious issue in the United States. Contrary to common perception, only 12 percent of America’s homeless people are veterans. Nonetheless, 49,933 of our service men and women are tonight without a safe place to sleep. And yes, I did say women: 8 % of homeless veterans are women.

Around the country, about 5000 women veterans are homeless. There are several factors that contribute to this: Women veterans face different challenges than male veterans. Their needs are often ignored by the community at large. There are less resources for women veterans. To add to insult, most of these women do not receive recognition for their service.

Part of the problem is the approach their needs: Homeless women have different needs. Those that are within reproductive years have a hard time finding how to taking care of their feminine needs. If they are single mothers, they have to worry about the well-being of their children. And all homeless women are at a higher risk of further violence. Homeless veteran women will experience further isolation. Veterans tend to have a harder time reintegrating into society. Therefore a homeless veteran women will have to deal with these issues, the stigmas women face, and the dangers on the streets.

Mental illness plays a big role on homelessness: it makes an individual more vulnerable to factors that lead to homelessness. Among the homeless veteran population, 80% suffer from mental health disorders. A study found that women who suffer Military Sexual Trauma (MST) were nine times more at risk of developing PTSD. This means that many women veterans who suffer from PTSD or had suffer MST are at a greater risk for experiencing homelessness than those who do not.

Although some organization have taken charge of this issue, such as the Department of Veteran Affairs, and Final Salute Inc., we all should do our part to help these female heroes. They sacrificed all for us, now we should do something for them.