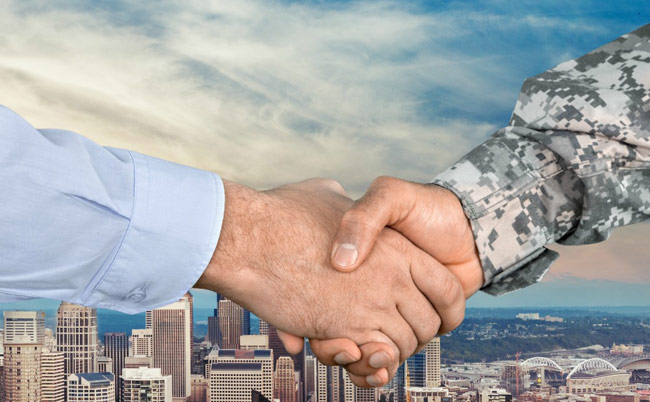 Transitioning from military to civilian life and employment isn’t a piece of cake. If you’re a veteran and a job seeker, you know what I’m talking about. Have you been sending out your military resume and not getting any replies from employers? You’re not alone.

A recent study found out that veterans list finding a job as the greatest challenge they face when transitioning to civilian life.

So, can your military resume even land you a job? Sure. But only as long as you translate all of the valuable skills you’ve acquired while working in the military into competencies that are relevant to civilian jobs.

Here’s how to get the most out of your military experience while writing your civilian resume.

As a professional transitioning from the military to the civilian sector, you need a resume that meets specific criteria. Naturally, it should entice recruiters to call you for an interview. But it also needs to serve as proof of your ability to transition into civilian employment. That’s why you should demonstrate the civilian applications of your military skills and experiences. Your resume should also aim to bridge the gap between the professional you were in the service, and the civilian employee you wish to become.

2. Plan Your Career, Here’s How

You won’t be able to market your skills for a civilian job if you haven’t developed a career strategy first. Start with your military employment and research occupations which are close to the positions you’ve held previously. You’ve got a specific skill set and training. Have a look around to see which industries employ people with these qualifications. If you’re undecided, it’s not a problem. You can write several versions of your resume for different career paths.

Got your target job? Great.

Now, list all your skills, education, and experience that are relevant and valuable. For an obvious example, if you’re applying for a job in accounting, your marksmanship skills won’t help you land the position. Expect to let go of some of your skills. That’s simply part of transitioning to a different industry.

If you list irrelevant skills and experiences on your resume, recruiters won’t see you as a relevant candidate.  Focus only on qualifications that you can transfer to your new role.

3. Write Your Resume With the Recruiter in Mind

If you aren’t sure about the civilian equivalent of your military job, check out CareerOneStop’s Military to Civilian Occupation Translator for easy conversion. Avoiding military-specific lingo will ensure that your resume foregrounds your strengths.

4. Translate Your Military Experience into a Career Summary

Since you’re a professional transitioning from one industry to another, you need a clear resume summary. The resume summary is the first thing recruiters are going to notice. That’s why it’s worth it to spend time crafting a summary to perfection.

There are two ways in which you can write your resume summary. You can either focus on who you were in the military, or who you want to become as a civilian.

If you choose to foreground your military background, remember that the recruiter might not be familiar with standard military procedures. They might not know about the tools or strategies used on the job.

That’s why you should anticipate the potential questions they might ask after reading your resume summary. Make sure to address them in your resume and cover letter.

You need to explain the specifics of your previous experience in a way that is understandable for civilian employers. A military-focused resume summary might lack keywords from the job description that recruiters seek.

Remember to use these keywords in other sections of your resume as well.

On the other hand, you can choose to write a resume summary that focuses on who you’d like to become as a civilian worker. You’ll get a chance to elaborate on the skills and responsibilities that were part of your professional experience later.

How can you show your military accomplishments in a way that helps HR managers appreciate them? Capture your accomplishments in metrics, percentage improvements, and numbers to show off your skills in a quantifiable manner. For example, a military pilot resume might read:

“Managed the workload of 10 personnel in aircraft maintenance, resulting in a 20% decrease of unexpected repairs.”

If you can’t connect an accomplishment to a number, you need to provide more context to help recruiters understand the impact you made on the job. For example, if you trained new aviators to use the weapons systems of different aircraft, you could make your accomplishment relevant to a civilian job by focusing on one trait. Were you hand-picked to train these people? Capture your accomplishment in this way:

Even if civilian employers respect your military experience, there might be a cultural barrier between you and job opportunities. By translating your military skills into civilian qualifications, you can effectively overcome this obstacle and land more job interviews. What are you waiting for? Strategize your civilian career, research your options, and find your target. Now you know how to make a resume that works to your advantage.