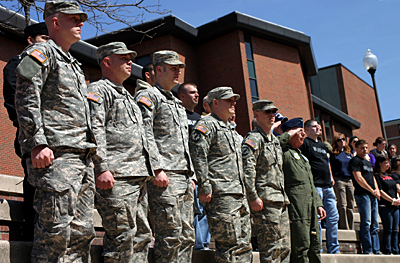 Event honoring Veterans and Wounded Warriors to include heroes from all branches, Military Color Guard, Flyover, and a patriotic performance by the 4-H Precision Drill Team.

All veterans and active duty military and a guest admitted free.

“This will be an outstanding ceremony celebrating and honoring our veterans and Wounded Warriors who perform such heroic service in preserving our freedom at home and abroad,” said Ca rine Clemen, president of Board of Directors of Prince William Veterans Farm Club, Inc., sponsors of Fair.

The ceremony will be highlighted by an address from Rear Admiral Robert H. Shumaker, USN (Ret) who was a Prisoner of War in for eight years after his plane was shot down.

The program will also include and invocation, Color Guard presentation, introduction of nation’s heroes from all branches, Flyover, introduction of founding members of Veteran’s Farm Club, a patriotic performance by 4-H Precision Horse Drill Team and benediction.  There will also be several historic and present day military displays.

Refreshments and a meet and greet session will follow ceremony where fair-goers can meet and say thanks to those who have defended our nation’s freedoms.

All veterans and active duty military and a guest will be admitted free throughout day which is also half price day for o rs attending fair.