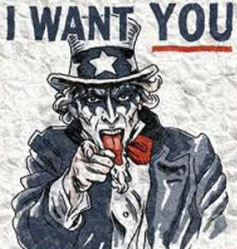 NEW YORK, NY—As part of the U.S. Chamber of Commerce and National Chamber Foundation’s Hiring Our Heroes program, world-renowned rock band KISS hired a veteran to serve as a roadie on its 2012 concert tour.  Gene Simmons made the announcement this morning live on NBC’s TODAY.

“We should all step up and give our heroes, our vets, a job,” said Simmons on TODAY. “It’s the least we can do. They volunteered for us. Our heroes go and represent us on the field of battle, voluntarily. Then they come back and we throw them back out here, good luck, get a job. They should have guaranteed jobs, and you out there, get off your behinds and give our heroes a job. This is in conjunction with the Chamber of Commerce.”

Army veteran and longtime KISS fan Paul Jordan was selected after a review of 1,900 applications received by Hiring Our Heroes. Jordan, who is from Buford, Georgia, served three tours of duty in Iraq and Afghanistan. He will start in July as a tour carpenter on the 44-city KISS tour. “It’s a dream come true,” said Jordan on TODAY. “I’ve always wanted to be involved with KISS somehow. I mean, I’ve been a fan since I was four years old. And wow, this is incredible.”

KISS made the commitment to hire a veteran for its upcoming tour on March 28, the day Hiring Our Heroes, the National Chamber Foundation, and Capital One announced the “Hiring 500,000 Heroes” campaign. The goal of the initiative is to engage the business community in committing to hire half a million veterans and military spouses by the end of 2014. In less than two months, the campaign has received more than 181,000 commitments.

“We are thrilled to see KISS follow through on its commitment to hire a veteran for its upcoming tour,” said retired Marine Lieutenant Colonel, Kevin Schmiegel, executive director of the U.S. Chamber’s Hiring Our Heroes program. “This is a tremendous opportunity for Paul, and we are glad Hiring Our Heroes could play a part in making his dream come true. We hope business owners across America will follow Gene Simmons’ call to action and realize the value of hiring our nation’s talented veterans and military spouses.”

In March 2011, the Chamber, in conjunction with the National Chamber Foundation, launched its Hiring Our Heroes program, a nationwide effort to help veterans and military spouses find meaningful employment. The Chamber started the program to improve public-private sector coordination in local communities, where veterans and their families are returning every day.  To date, Hiring Our Heroes has hosted 176 hiring fairs in 48 states and the District of Columbia, helping close to 10,000 veterans and military spouses find employment.