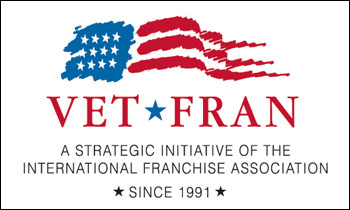 WASHINGTON, Nov. 10, 2014 – More than 50,000 veterans have found employment in the franchise industry over the past year and more than 400 veterans have become local franchise business owners, according to a new Veterans-in-Franchising Study, released today by the International Franchise Association (IFA).

“Franchise businesses realize that creating employment and small business ownership opportunities for veterans, military spouses and wounded warriors is not only the right thing to do, but it makes good business sense,” said IFA President & CEO Steve Caldeira, CFE. “Veterans thrive in the franchise industry because they are used to following systems, structure, working as part of a team and they truly understand what leadership is all about. This is exactly how the time-tested model of franchising works, by following that same proven and successful template. We are proud of our efforts to help veterans become local franchise business owners as well as find employment in franchise establishments.”

The study surveyed a variety of industries and company sizes in order to capture a representative sample of the franchise industry. According to the survey, conducted by Franchise Business Review a total of 52,333 veterans have found employment opportunities in the past year across 13,446 business locations. Additionally, 62 participating franchise brands successfully recruited 416 veterans as new franchisees during the same period, and an additional 350 veteran franchisee candidates are currently under consideration. The survey also found that 70 percent of the franchisors surveyed indicated they had hired a veteran or the spouse of a veteran in the past year. The most popular industries among veterans coming into franchising include Automotive (16 percent), General Services (17 percent), Food (14 percent), Residential/Home Services (14 percent) and Business Services (9 percent). Of the franchisees surveyed, 98 percent believe that veterans are a good fit for employment within their businesses.

On Veterans Day 2011, the franchising industry was part of the first and largest private-sector commitments to the White House Joining Forces Program passionately led by First Lady Michelle Obama and Dr. Jill Biden. IFA and its membership pledged to hire as employees and recruit as franchise business owners 80,000 veterans, wounded warriors and military spouses through 2014. Since 2011, the franchise industry has significantly surpassed the goal, with more than 203,890 veterans, military spouses and wounded warriors entering the industry – including 5,608 new veteran franchisees.

“The impact made by VetFran, Operation Enduring Opportunity and the White House Joining Forces Program is a profound demonstration of the opportunities afforded by franchise businesses to pave the way for business ownership by Americas veterans,” said Caldeira. “Franchising is proud to enable our nation’s veterans to fulfill their dreams and find career opportunities here at home.”

In November 2013, IFA received the U.S. Chamber of Commerce and Capital One Bank Award for Small Business Veteran and Military Spouse Employment at the 3rd Annual Lee Anderson Awards Dinner hosted by the Chamber. Additionally, the IFA was also honored in a White House ceremony in April, 2013 along with other for-profit and not-for-profit organizations for their significant commitments and contributions to veterans-related hiring programs.

Caldeira will be discussing the Veterans-in-Franchising Study and the importance of hiring veterans at a Nov. 12 Hiring Our Heroes event sponsored by the U.S. Chamber of Commerce. Details for the event are here.

About the International Franchise Association

The International Franchise Association is the world’s oldest and largest organization representing franchising worldwide. Celebrating over 50 years of excellence, education and advocacy, IFA works through its government relations and public policy, media relations and educational programs to protect, enhance and promote franchising. Through its media awareness campaign highlighting the theme, Franchising: Building Local Businesses, One Opportunity at a Time, IFA promotes the economic impact of the more than 825,000 franchise establishments, which support nearly 18 million jobs and $2.1 trillion of economic output for the U.S. economy. IFA members include franchise companies in over 300 different business format categories, individual franchisees and companies that support the industry in marketing, law and business development.