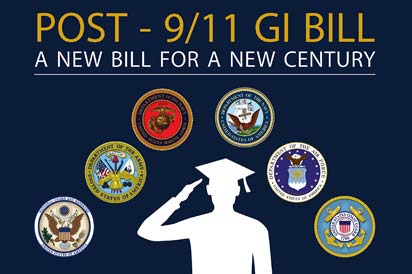 We often hear … my housing allowance is late, how am I supposed to pay my rent, food, etc.

We often hear … someone messed up my check, its less than I got last month….

Here are some common questions:

“What is the monthly housing allowance?”

It’s a monthly benefit paid via direct deposit to students while attending school under the Post-9/11 GI Bill, and is equal to the Basic Allowance for Housing (BAH) of an E-5 with dependents.  It is based on the zip code of the school (a chart of BAH rates by ZIP code is at http://www.defensetravel.dod.mil/perdiem/bah.html).  Active duty members and spouses of active duty members using transferred entitlement cannot receive the benefit, but Veterans, their spouses and dependents can receive the benefit.

“When does VA send payments?”

Payments are issued at the beginning of each month for training that occurred during the previous month.  For example, assuming timely certification of enrollment by the school and timely processing by VA, payments for training taken in January will be issued by VA in February.  The school must submit a student’s enrollment information to VA in order to start the payments.

“Why is my payment less than expected?”

The most common reason for a smaller than expected BAH payment is due to the payment being pro-rated based on the number of days in the month that a student is enrolled.  Payments are made in arrears and only for the days actually attended, so if the term starts in the middle of January, the payment received in the beginning of February will be pro-rated accordingly.  The first full payment will be issued in March for the month of February.

For example, suppose you are attending school full-time and your housing rate is $800 per month.  The term starts on January 19th and goes until May 14th.  All months are based on 30 day periods, so months that have more or less days do not impact the benefit amount.  Therefore, the payment in this case for the month of January will be for 12 out of 30 days (19th to 30th), in the amount of $320, and it will be received in February.  The payments for February, March, and April will be $800 each month, and the payment for May will be $373.33 (pro-rated from the 1st through the 14th).

Also, a student must attend more than half-time to receive the housing allowance payment.  Benefits for attendance at less than full-time are pro-rated to the nearest multiple of ten.  For example, if 12 credits are required for full-time attendance and the student is taking 8 credits, the student will receive 70 percent of the housing allowance (8 divided by 12 equals .66, which is rounded up to 70 percent).

Lastly, lower than expected payments may also be caused by over-payments.  Over-payments are usually caused by students reducing the number of credit hours for which they are enrolled during the middle of a term, which can cause payments to be made based on the incorrect number of credit hours.  When this occurs, the amount of the over-payment is deducted out of future benefit payments until the account is corrected.

The monthly housing allowance payment rate for those enrolled solely in distance learning is half the national average of the BAH rates payable for an E-5 with dependents in the continental U.S. ($684 per month for the current academic year).  A student can receive the full housing rate by attending one “brick and mortar’’ class where he or she physically attends.

The housing allowance for attending a foreign school is based on the average of the BAH rates payable for an E-5 with dependents in the continental U.S. (currently $1,368 per month).