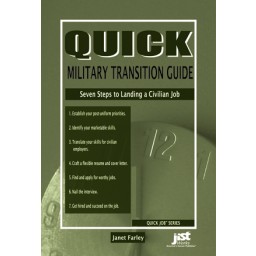 — Individuals who are transitioning from military to civilian life have numerous details to sort out, including how to translate ir experience on resumes. In her new booklet, Quick Military Transition Guide, author Janet Farley pinpoints which military words and phrases should be excluded from resumes.

“You may wonder how you can possibly translate some words from military,” says Farley. “The answer might be not to translate m at all unless y directly apply to job.”

“Finally, unless you are applying for a federal or state job, you probably don’t need to get into finer details of your military discharge—be it honorable or general,” Farley explains. “Those associated with military will only be confused by it all. For your purposes, you simply left military service, fulfilled your service commitment or did your time.”

Additional information can be found in Quick Military Transition Guide. The booklet is available from JIST Publishing in a package of 10 copies.

Janet Farley is author of Military-to-Civilian Career Transition Guide and is also an experienced outplacement career specialist in job search assistance field. She worked for six years as a military transition counselor and later as a career center manager with Army Career and Alumni Program at various locations throughout world. She is also a freelance writer who specializes in job search advice.