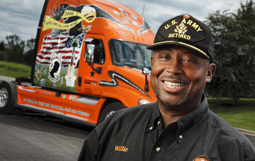 GREEN BAY, Wis. – (November 11, 2013) – Schneider National, Inc., a premier provider of truckload, intermodal and logistics services, announced today it has made the coveted G.I. Jobs Top 100 Military Friendly Employers® list for the eighth straight year. Schneider ranked number ten on the list — earning acknowledgment for the programs and benefits it offers to current and former military personnel. It is the highest ranking trucking company named to this year’s list.

G.I. Jobs’ 2014 Top 100 Military Friendly Employers list honors the top 2 percent of U.S. companies that are doing the most to embrace America’s service members and veterans. More than 5,000 companies were ranked this year based on survey results that assess the strength of a company’s military recruiting program, including the percentage of new hires with prior military service and all policies in place to recognize military service.

“Even though we have been named to this prestigious list eight years in a row, learning we have been honored (along with so many other companies with strong track records of military support) is always a big thrill,” said Rob Reich, vice president of maintenance and driver recruiting, Schneider National and a veteran of the U.S. Army. “The highest honor, of course, is the fact that so many current and former military members choose Schneider as their employer. It’s not surprising, since our core values of safety, integrity, respect and excellence mirror those of the military: duty, respect, integrity and pride.”

Schneider National’s deep military roots date back to the company’s founder, Al Schneider, a National Guardsman who understood the valuable skills military members bring to the table. Today, Schneider continues its commitment of providing rewarding careers to those with a military background through specific programs to ease transition and ensure long-term career success, including:

“Schneider bends over backward to accommodate those who serve in the military and understands the importance of working with your schedule,” says Richard Barczewski, a regional driver for Schneider’s Van-Truckload division who has been deployed to Afghanistan twice since joining the company in 2006. “Plus, there is a real sense of loyalty and respect at Schneider along with the feeling of camaraderie — you are a member of the team.”

Coupled with the comprehensive benefits package Schneider provides to all associates, military personnel can also expect:

Schneider is one of the nation’s largest and most-recognized employers of military personnel, with over 20 percent of its hires having a military background. In addition to eight consecutive years of recognition from G.I. Jobs, the company has won numerous national, state and regional awards: the inaugural Department of Defense Freedom Award, HireVetsFirst ESGR 5-Star employer, ESGR Extraordinary Employer Support Award, 2013 Most Valuable Employer by Civilianjobs.com and Top 35 Veteran Employer by Military.com.

A $3.5 billion company and one of the largest truckload carriers in North America, Schneider has been a top choice for drivers for more than 77 years. Schneider provides drivers great weekly miles, steady freight and the comfort of knowing that “safety first and always” is the cornerstone of the company’s philosophy. Schneider is ranked a top-paying carrier by the National Transportation Institute and has been nationally recognized for its support of veterans, Reservists and National Guard members. For more information about Schneider National career opportunities, visit www.schneiderjobs.com. You can also connect with Schneider on Facebook at www.facebook.com/jobsatschneider and Twitter @schneiderjobs.

G.I. Jobs is published by Victory Media, a service-disabled, veteran-owned small business and has served the military community since 2001. Our Military Friendly® lists and methodology can be found at www.MilitaryFriendly.com. Our data-driven lists are published in G.I. Jobs, Military Spouse, Vetrepreneur magazines, republished in periodicals like USA Today, Wall Street Journal and are frequently cited on national TV programs such as CNN, CNBC, NBC, Fox News and others. You can follow Military Friendly on Facebook at www.facebook.com/MilitaryFriendly or on Twitter@Mil_Friendly.