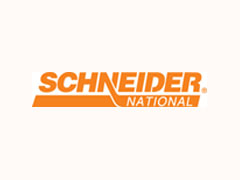 In 1992 the company took its commitment to the next level by creating a formal military recruitment program. Today Schneider proudly celebrated the 20th anniversary of this initiative at its Green Bay headquarters with a visit from several high-ranking military officials, as well as Wisconsin Gov. Scott Walker.

Major General Keith Thurgood and Director Erin Thede – both representing the Employer Partnership Office of the Armed Forces – spent the day onsite at Schneider National. In the morning, they toured the company’s Driver Training Center and participated in a “Town Hall” meeting with newly hired drivers who have military backgrounds and Schneider recruiting leaders. The Town Hall session focused on public and private partnerships and initiatives to help job placement of both active and former military personnel. Additionally, the guests participated in Schneider’s state-of-the-art driver simulation training and received a first-class look at the sights of Green Bay from the passenger seat of a Schneider rig.

This afternoon these special guests participated in a ceremony with Gov. Walker that officially commemorated Schneider’s military recruitment program. When Gov. Walker addressed Schneider associates gathered at the company’s corporate headquarters, he recognized Schneider for taking a leading role in providing good, stable jobs for both current and former military personnel.

“You guys get this at Schneider: it’s good for the company, too,” Walker said. “Our military personnel—and those coming back as veterans—are well trained, well prepared, dedicated, committed and they understand discipline and organization and are a great asset to our employers. This is something we’ve been pushing this year, but you’ve been pushing it for two decades… that’s a real testament to this company’s commitment.”

In his remarks, Thurgood noted that the military does two things really, really well, that every business wants: They deliver results and they grow leaders.

“I’ve been impressed as I’ve been here at Schneider today…with what you are doing to hire our great veterans who will make a difference in your business and in your communities,” said Gen. Thurgood. “Schneider does it in such a humble way, and I think that’s what we need.”

During the ceremony, Schneider Vice President Mike Hinz announced that the company plans to hire 650 current and former military members across the country in 2012.

“The critical thinking skills, leadership and motivation military personnel bring to the workforce are attractive in the fast-paced, complex environment of a modern-day transportation and logistics operation,” he said. “By working collaboratively with groups like the Wisconsin Department of Veterans Affairs, the Wisconsin National Guard and the U.S. Army Reserves’ Employer Partnership Office, we have a huge opportunity to put more people to work in Wisconsin and across the U.S. We’re confident that the governor’s initiatives will help us reach our goal.”

Immediately following the ceremony, Gov. Walker read a proclamation declaring April 4, 2012, as Schneider National Hire a Hero Day. He then participated in a Schneider tradition, “Sound the Horn.” The tradition commemorates special events at Schneider, and Gov. Walker had the opportunity to pull the truck horn after addressing associates from above the customer service area.

Through the years, Schneider National has developed a number of programs specifically for current and former military personnel, including the Military Apprenticeship Program. This program provides a smart way for military members to use their VA benefits. Through the program, military members who become truck drivers are eligible to earn up to $1,069 per month in VA education benefits in their first year, in addition to their Schneider pay checks.

As a result of such efforts, Schneider has consistently been recognized as a national leader in supporting current and former members of the military and has received numerous national, state and armed service awards. This year alone, Schneider National was named to G.I. Jobs magazine’s annual list of Top Military-Friendly Employers for the sixth consecutive year. It was also named to Civilianjobs.com’s annual Most Valuable Employers for Military list for the second consecutive year (winners were chosen based on surveys in which employers outlined their 2011 recruiting, training and retention plans that best serve military service members and veterans).

A $3.4 billion company and one of the largest truckload carriers in North America, Schneider has been a top choice for drivers for more than 75 years. Schneider provides drivers great weekly miles, steady freight and the comfort of knowing that “safety first and always” is the cornerstone of the company’s philosophy. Schneider is ranked a top-paying carrier by the National Transportation Institute and has been nationally recognized for its support of veterans, Reservists and National Guard members. For more information about Schneider National career opportunities, visit www.schneiderjobs.com. You can also connect with Schneider on Facebook at www.facebook.com/jobsatschneider and Twitter at www.twitter.com/schneiderjobs.