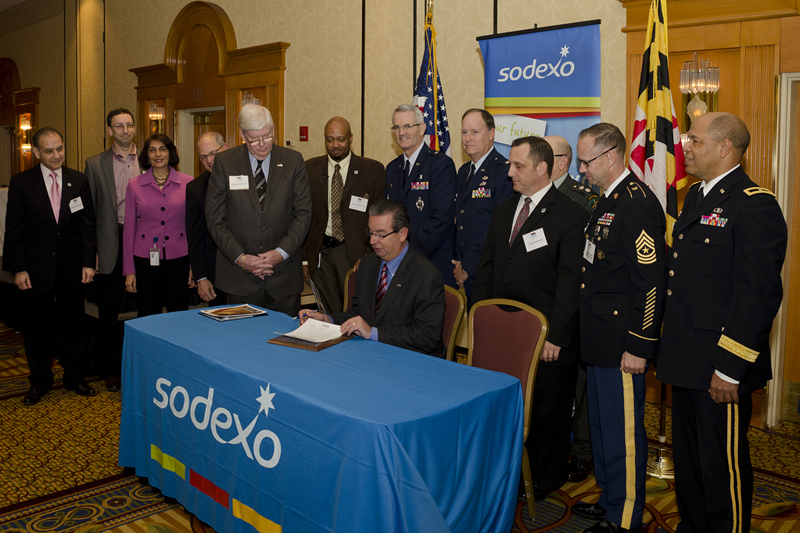 GAITHERSBURG, Md., November 15, 2011 – Sodexo was named one of the nation’s top 100 Military Friendly Employers for its enterprise-wide focus on hiring, supporting and retaining military veterans and reservists, according to GI Jobs, the premier publication for post-military employment. The GI Jobs list recognizes the best corporate recruitment and retention programs aimed at veterans. This is the fourth consecutive year that Sodexo has been included on the list, which is compiled from a review of about 5,000 eligible companies.

According to GI Jobs, nearly 400,000 new civilian workers annually retire or separate from the military, the second-largest pool of talent, behind college graduates, available to United States employers. Sodexo has dedicated resources to help these veterans transition from military to civilian leadership.

“Sodexo recognizes that veterans provide a rich talent pool with specialized skills that can contribute to the success of the company,” said Peri Bridger, senior vice president and chief human resources officer. “Through our mentoring programs, we facilitate a smoother transition for veterans into the civilian workplace and support their professional growth.”

Transitioning soldiers and veterans are encouraged to visit www.SodexoHiresHeroes.com for job opportunities.

George Chavel, president and CEO, Sodexo, Inc., reaffirmed support for Sodexo employees who serve in the Guard and Reserve by signing a Statement of Support pledging to:

“Each day, the employees of Sodexo serve millions of Americans across this great nation, and we are especially pleased to be able to provide assistance to our reservists and their families as they serve our country,” said Chavel.

HONOR (Honoring Our Nation’s finest with Opportunity and Respect), the company’s military employee network group launched three years ago, now has more than 500 members and has established five regional chapters. The mission of the Military Network Group is to provide support, guidance and resources to employees and families connected to the military by offering development opportunities; providing a forum to recognize and celebrate contributions made by service members and their families to our country; and establish partnerships with community groups that support veterans, active duty, National Guard and the military reserve.

Sodexo previously has been awarded the Secretary of Defense Freedom Award, the highest federal-level employer recognition for exceptional support of our nation’s defense, and the Pro Patria Award from the Maryland Committee for Employer Support of the Guard and Reserve, the highest state-level award to a civilian employer.  To see the full list of GI Jobs 100 Military Friendly Employers, go to http://www.gijobs.com/2011Top100-FullList.aspx.

Sodexo, Inc. (www.sodexoUSA.com), leading Quality of Daily Life Solutions company in the U.S., Canada, and Mexico, delivers On Site Service Solutions in Corporate, Education, Health Care, Government, and Remote Site segments, as well as Motivation Solutions such as Esteem Pass. Sodexo, Inc., headquartered in Gaithersburg, Md., funds all administrative costs for the Sodexo Foundation (www.SodexoFoundation.org), an independent charitable organization that, since its founding in 1999, has made more than $15 million in grants to fight hunger in America. Visit the corporate blog at www.sodexoUSA.com/blog.

Sodexo, world leader in Quality of Daily Life Solutions Quality of Life plays an important role in the progress of individuals and the performance of organizations. Based on this conviction, Sodexo acts as the strategic partner for companies and institutions that place a premium on performance and employee well-being, as it has since Pierre Bellon founded the company in 1966. Sharing the same passion for service, Sodexo’s 380,000 employees in 80 countries design, manage and deliver an unrivaled array of On-site Service Solutions and Motivation Solutions. Sodexo has created a new form of service business that contributes to the fulfillment of its employees and the economic, social and environmental development of the communities, regions and countries in which it operates.