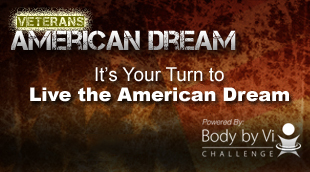 ViSalus, the number one challenge marketing company with its Body by Vi™ 90-Day Challenge, has partnered with Fascination Entertainment Corporation to help veterans and their spouses bolster economic security through entrepreneurship opportunities. Fascination Entertainment’s “American Dream with Kristin Best” airs weekly on the Armed Forces Network (AFN) and tells the inspiring true stories of men and women who have overcome huge obstacles to achieve the American Dream.

Ryan Blair, Co- Founder and Chief Executive Officer of ViSalus, will share his struggles on the road from gang member to self-made multi-millionaire airing May 3 and on May 6.

“Unemployment for veterans is almost double the national average and it’s a disgrace,” stated Ryan Blair, “This program is designed to help our men and women of service leverage the knowledge gained through the military and its lifestyle into new business.”

“Most Veterans I speak to are interested in starting their own business and are just not sure how. America needs new businesses to solve our old jobs problem. By sponsoring American Forces Network ViSalus is doing its part to help those future entrepreneurs take themselves off the unemployment list and create their own employment.” Blair continued. The statistics agree with Blair’s observation as more than 50 percent of IAVA members are interested in starting a
business in the next three-to-five years.

“We are excited by Ryan Blair’s story as an entrepreneurial CEO,” states American Dream host Kristin Best. “The success of ViSalus is an extension of Blair’s philosophy in practice that our audience can learn from and use.”

Founded in 2005 with headquarters in Los Angeles, CA and Troy, MI, ViSalus™ is the company
behind the wildly successful Body by Vi™ Challenge, a 90-Day lifestyle transformation platform. ViSalus champions personal victories and entrepreneurship through a social marketing model, premium products, and global community culture. Simple, Rewarding and Fun—the Body by Vi Challenge is the fastest growing health and fitness Challenge in North America today. ViSalus™ is majority-owned by Blyth, Inc. www.ViSalus.com

About American Dream with Kristin Best

Fascination Entertainment releases 52 new, original episodes of “American Dream with Kristin Best” each year. The series airs weekly on Armed Forces Network, the largest radio network in the world on more than 177 countries and every U.S. ship at Sea. The series tells the inspiring true stories of men and women who have either served in the Armed Forces, entertained or supported the troops, and gone on to achieve the American Dream. The ‘never say die’ stories encourage, instruct, amaze and fire up Armed Forces Network’s vast listening audience every week. For more information about American Dream, go to americandreamonafn.com..

Finding and Getting a Remote Work Position    Increasingly, a larger number of  jobs can be done from beyond a fixed office or other work location these days and today’s veterans are able to capitalize on this they seek work in the civilian sector. What practices should professionals make use of to locate as well […]

This message is only visible to admins.