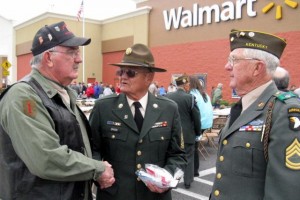 Wal-Mart, the nation’s largest retailer, will announce Tuesday a plan to hire every veteran who wants a job, provided that the veterans have left the military in the previous year and did not receive a dishonorable discharge.

The announcement, to be made in a speech in by William S. Simon, the president and chief executive of , represents among the largest hiring commitments for veterans in history.

Company officials said they believe the program, which will officially begin on Memorial Day — May 27 this year — will lead to the hiring of more than 100,000 people in the next five years, the length of the commitment.

“Let’s be clear: Hiring a veteran can be one of the best decisions any of us can make,” Mr. Simon will say in his keynote speech to the National Retail Federation, according to prepared text. “These are leaders with discipline, training and a passion for service.”

In a statement, the first lady, Michelle Obama, who has led a campaign by the White House to encourage businesses to hire veterans, called the Wal-Mart plan “historic,” adding that she planned to urge other corporations to follow suit.

“We all believe that no one who serves our country should have to fight for a job once they return home,” Mrs. Obama said in the statement. “Wal-Mart is setting a groundbreaking example for the private sector to follow.”

Reducing the veteran unemployment rate was among the few veterans’ issues discussed by the presidential candidates last year. It has also been central to the work of Mrs. Obama’s campaign to assist veterans and military families, Joining Forces. Last August, her office said that private companies working with Joining Forces had hired or trained 125,000 veterans or their spouses in a single year, surpassing the group’s goal of 100,000 a full year early.

Wal-Mart’s foundation has consistently been among the most generous contributors to veterans’ charities, committing to donate $20 million to veterans’ causes by 2015. “I take this one personally,” Mr. Simon, a Navy veteran, says in his prepared text.

But the company has also been aggressive about hiring veterans because it views them as good employees, said Nelson Lichtenstein, a labor historian at the University of California, Santa Barbara, and the author of the book “The Retail Revolution: How Wal-Mart Created a Brave New World of Business.”

About 100,000 of the company’s 1.4 million employees in the are veterans, company officials said.

“They like military people because they have a sense of hierarchy and a commitment to the organization they are in,” said Professor Lichtenstein, who has been a critic of Wal-Mart’s management practices. “And that’s important to Wal-Mart.” In recent years, Wal-Mart has been the target of lawsuits by women, accusing the company of discrimination in salaries and promotions.

Gary Profit, a retired Army brigadier general who is senior director of military programs at Wal-Mart, said the company might not be able to guarantee that every veteran who wants a full-time job will be able to get one. But he said that because of the size of Wal-Mart’s retail operation and supply chain, it is almost certain that the company could find a job — even a part-time one — close to any veteran who wanted one.

“If you’re a veteran and you want a job in the retail industry, you have a place at Wal-Mart,” he said.