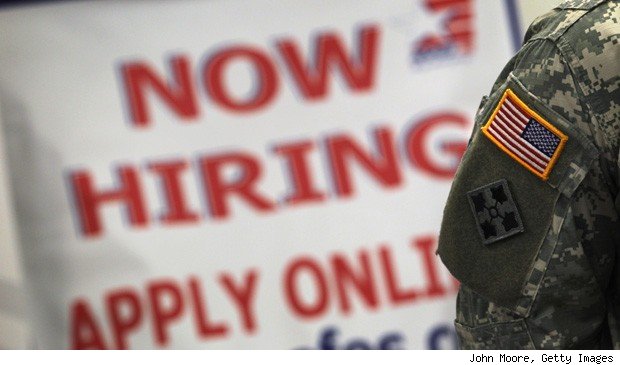 With the nation in recovery, investment in resources is growing. We see new commercial construction underway, roads and highways under repair, and consumer spending on the uptick. With all this new growth, companies are starting to loosen the stronghold on hiring freezes initiated when our economy was plummeting. Yes, as hiring managers and recruiters across the country seek to find talent, a highly untapped and ready workforce awaits employment.

Currently there are roughly 163,000 unemployed post-9/11 veterans and more than 600,000 unemployed veterans overall.  These individuals are the beneficiaries of more than $130 billion of investment in training, education, and skill building from the US government.

Hiring former military personnel could be the best business decision a company (and a hiring manager) makes.

There is a disconnect between veterans and civilian hiring managers, and it goes both ways. Veterans overwhelmingly leave military service unprepared and unarmed with the tools to position themselves as viable candidates to civilian companies, and hiring managers are unskilled and untrained in how to recruit military veterans for jobs outside of service.

So what can the veteran employee bring to the organization?

Veterans see their work as a career, not a job. To them, a job is the place you show up, perform work, and earn a wage for services. A career, on the other hand, is where you commit your whole self, build a foundation of skills, talents, and experience, and add value to the organization, the mission, and the team at every step.

After years of service, sometimes multiple deployments to violent and stressful environments, and sacrifice of family and friends, veterans transition to a civilian career with little more than a week or two of preparation. It is no wonder that veterans struggle with articulating, positioning, and marketing their value to civilian employers.

I have worked with several hundred former and transitioning veterans to help them articulate their value proposition so hiring managers will be able to clearly see the benefit of engaging and hiring them. Similarly, I aid corporate recruiters and hiring teams in understanding the unique skills and attributes our former military bring to the workplace.

Here are some of the key reasons why hiring a veteran could be your best business decision yet:

Businesses investing in human capital are wise to learn how to recruit, onboard, and retain veterans. The small investment in training a hiring and recruiting team on how to read military resumes, interview veterans, and recruit veterans online is returned in an workforce that contributes at levels that exceed expectations.

Lida Citroën is the author of Your Next Mission: A personal branding guide for the military-to-civilian transition and Principal of LIDA360, a consulting firm that helps create effective market positioning through the use of brand strategies. She regularly presents at conferences, events and programs, teaching transitioning veterans how to understand their unique value and market them to future employers.

Citroën is an active member of Employer Support of the Guard and Reserve (ESGR) and works closely with General Peter Pace’s program in Philadelphia, Wall Street Warfighters Foundation (WSWF). For more information, please visit, www.yournextmissionbook.com  and connect with her on twitter, @LIDA360.

As with the first Friday of each month, the BLS employment statistics were released today.  Attached is our monthly ‘cheat sheet’ for your use and information.  The national unemployment rate for November 2017 remained unchanged at 4.1% and the Veteran unemployment numbers for November 2017 increased from 2.7% to 4.0%.     Thanks to all of […]

Beef up your job search and expand your resume building . Add these books to your library and increase your chances of success by writing a better resume.
View on Facebook
·Share