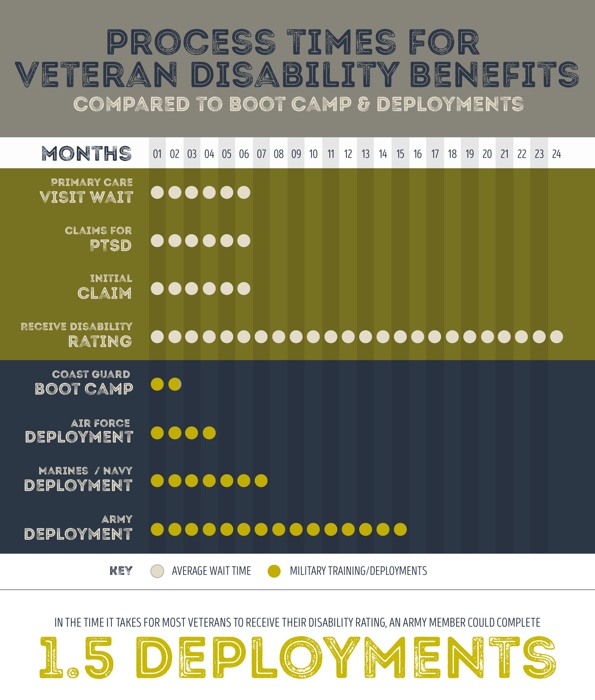 If you’re a military veteran or you have a loved one who is, you may have experienced a frustrating couple of years trying to receive disability benefits from the U.S. Department of Veterans Affairs (VA). You’re not alone if it feels like you’ve been waiting for too damn long.

The United States is home to approximately 22 million veterans, 1.6 million of whom have served in Iraq or Afghanistan. And a whopping 45% of these 1.6 million are seeking disability compensation for service-related injuries in the line of combat.

To put this number in perspective, that’s more than double the 22% of veterans who filed claims after the Gulf War in the early 1990s.

But with more and more veterans currently seeking disability benefits, the VA has experienced a backlog — one the agency promised to fix by Oct. 1 of last year.

The VA failed to meet its self-imposed deadline, and almost 100,000 disability claims are still unresolved.

What’s worse is that the veterans who have received their disability rating and benefits payouts had to wait an average of 24 months — that’s enough time for a single member in the U.S. Army to complete one-and-a-half military deployments.

And when a disability claim is denied, the appeals process is especially grueling. More than half of all appeals claims are sent back for another review — sometimes more than one — and the average wait time on an appeal decision is more than 1,200 days.

But as the VA fails to fix its broken system, a VA inspector general reports that the agency had no qualms about adopting a relocation program to obtain salary increases and other monetary benefits.

The inspector general also found that the VA spent $1.3 billion to make its electronic claims system “partially effective” — and that 300,000 veterans whose claims were listed as “pending” had already died.

Darin Selnick, who worked at the VA for eight years and is now senior veterans adviser at Concerned Veterans for America, says the VA operates within a “culture of corruption” in both its Veterans Benefits Administration (VBA) and Veterans Health Administration (VHA).

An independent 4,000-page review released last September pointed out that the VHA specifically has significant flaws, including major leadership problems, a bloated bureaucracy and an unsustainable budget. The review was mandated by the Veterans Access, Choice and Accountability Act, which was passed last year after a scandal at the VA led to the resignation of several leadership officials.

The VA urges that its succeeded at reducing the backlog of disability claims in 2015, as the number of backlogged claims is down by 88 percent since spring of 2013. But, despite earlier promises of getting the number to zero, the VA states that “complete elimination of the backlog may not be achievable under our current processing systems and procedures.”

Another issue is that, besides the long wait time for claims to be processed, the disability claim for veterans is 23 pages long — the last thing an injured veteran needs to deal with after fighting for his country.

Many veterans are so fed up with the VA nightmares that they’ve created a new slogan for the organization: “Delay, Deny and Hope That I Die.”

VA representatives say that more money from Congress — or a rewrite of the law — could go a long way in fixing the agency’s problems.

If you or a loved one is a disabled veteran tasked with filing out a benefits claim, be sure to do your research. Save all your medical evidence and make sure you have a physician report documenting your injury during your time of service. It wouldn’t hurt to work with a lawyer, too — veterans don’t pay their attorneys unless their claims are approved.

The VA system may be broken, but you or your loved one doesn’t have to be.

Adrienne Erin is a freelance writer who writes at Miss Rx about health and the healthcare system.